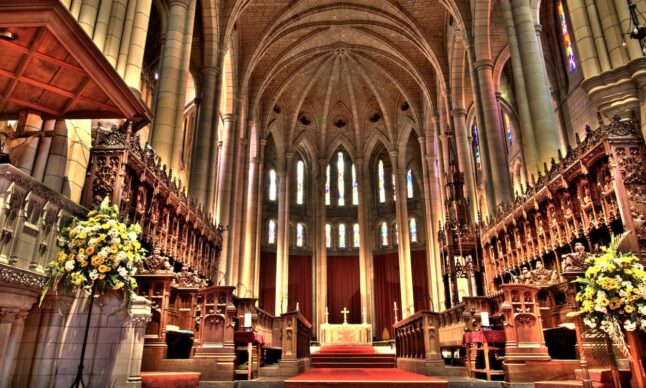 It is unique in Australia as the completion of the building design was achieved through collaboration between clergy, stonemasons and architects over a period of almost 100 years.

The first stage of construction began in 1906 and took four years to complete. This included the chancel, sanctuary and ambulatory, the quire and its aisles, the transepts and crossing, the Lady Chapel to the liturgical north of the quire, the double aisles and the first bay of the nave.

In 1965 the second stage was commenced and took a further four years. This consisted of the laying of foundations for the extensions, a two-bay extension to the nave, and demolition and removal of the temporary west wall.

The third stage of construction commenced in 1989 and took 20 years to complete. This stage comprised the erection of the south west porch, the final bay of the nave, the west front, the north and south towers and the central tower. The copper-clad western spires were lifted into position on 1 March 2008.

In 2009 as part of the Q150 celebrations, St John’s Cathedral was announced as one of the Q150 Icons of Queensland for its role as a “structure and engineering feat”.

Unique points of interest to note when visiting include:

Visit the St John’s Cathedral website for further details; or browse through more than 90 other BLHN Places to Visit.